Bill Kupinse addresses the Board of Selectmen and Sacred Heart University 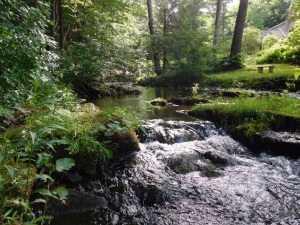 Please join us at 7:30, Thursday, August 18, 2016 at the Library Community Room where CFE will present to the BOS a proposal to retain the 29.6 acres of property located at 22 South Park Avenue as open space in perpetuity.

Your presence at the presentation will send a strong message to the selectmen that the majority of the townspeople feel very strongly about preserving this unique piece of Easton’s character and heritage for current and future generations.

Please pass this email to anyone you know who is interested in preserving Easton’s future and character.

Thank you for your support!

Some families have made Easton their home for many generations, but none have been in town as long as the brook trout.

Wild breeding grounds for these native fish have come up against threats of development since the early 1970s on unspoiled open and feral expanses of land known as Trout Brook Valley and South Park Avenue.

One of these parcels has already been preserved.

Back in the mid-90s, a group of town conservationists came together to protect Trout Brook Valley — and its namesake fish — imperiled due to the prospect of a golf course and condominiums.

Thanks to the band of determined locals, the Trout Brook Valley property, and the wild trout breeding ground in its streams — called class 1 wild trout management area — is safe from development.

However, across town the South Park Avenue property — and its share of the town’s class 1 wild trout management area — still faces an uncertain fate.

This piece is much more impressive, according to James Prosek, author of several books on trout and a lifelong Easton resident who caught his first trout there.

“The Mill River is a much more robust wild trout fishery. It’s a larger stream with larger fish and more friendly to anglers than the brook in Trout Brook Valley,” Prosek said.

The uniqueness of having two such pristine streams in one town is due to the legacy of Easton and its residents, who have a tradition of protecting wild places.

Class 1 wild trout management area is a designation where trout reproduce enough to keep it stocked all on their own. Only 10 such places remain in the state of Connecticut.

Other rivers have trout that is farmed by the state and put into the waterways.

That the brook trout are able to survive — and reproduce naturally — on these properties is a testament to something really special in today’s increasingly polluted world.

“The fact that they are there reproducing tells us it’s a remarkably clean resource,” Prosek said.

And that’s not all.

“It’s not just any stream,” Prosek said of the Mill River, “and therefore the land that embraces it is not just any piece of land.”

Prosek has fished streams around the world, from Spain to Japan, from Iceland to Arctic Russia, to document trout diversity for his books. The Mill River on the South Park Avenue property, he says, is one of the best he has seen for brook trout.

“My fear is that once we hand over the property to development we lose control,” he said.

In order for the brook trout to survive they need cold water. The Easton Reservoir releases cold water from its depths, which then feeds into the Mill River.

It’s cold enough for trout even through the summer.

Which will become more crucial to the survival of trout as the climate warms, according to Tim Barry, supervising fisheries biologist for the Connecticut Department of Energy and Environmental Protection western headquarters.

If developed, asphalt on parking lots in South Park Avenue will heat up in summer, and when it rains the warm runoff will make its way into the water, raising temperatures and becoming inhospitable to brook trout.

Brook trout lay their eggs in specific-sized gravel, and they have to stay buried and oxygenated from fall through to spring. There needs to be spaces between the gravel for the water to run through and provide the oxygenation.

When development happens, heavy rain on the exposed ground causes sand and other deposits to run off into the water, where it plugs up and buries the gravel. The eggs then suffocate.

“Any number of known and predictable… or unknown effects of development and human overuse will lead to the end of this fishery,” Prosek said. “In two or three years, the trout will be gone.”

He has seen it happen time and time again, from development and from excessive sanding of roads and parking lots in winter when the eggs are in the brooks.

Barry said that it would be very hard to prevent the loss.

“Based on past track records everywhere else, it would be a challenge,” Barry said. He has spent 28 years working as a field biologist, several years as an environmental consultant and time in the Peace Corps in Central America as a fisheries biologist.

Barry pointed out that there are all kinds of cascading effects accompanying losing one piece of the environmental puzzle that sometimes are not seen until many years later.

“How far down that road do you want to go before you put everything into a tailspin?” Barry said.

He said that when we lose these things, we see it has much more of a ripple effect than we knew when they were here.

“Everything in nature has a role,” Barry said.

Some insects on the river have the same requirements as the brook trout. And those insects feed frogs, salamanders, turtles and more. Birds, otters, mink, raccoons, ducks and fish are among the other creatures that feed off the river.

Altering one part shifts everything.

“A lot of people that don’t fish are oblivious to changes that occur,” Barry said.

Prosek would also like to see trout specifically and nature in general preserved for the next generation to help light their hearts and imaginations.

“The more of nature we cover with asphalt, the less we have to feed our awe and wonder,” Prosek said.

On youtube.com there are many interviews with Prosek educating and inspiring others — a lifelong mission first sparked by his time enmeshed in the beauty of the Mill River.

You can also find his film, “The Complete Angler,” on youtube.com and below.  It chronicles Prosek’s journey to Europe, following in the footsteps of the author Izaak Walton, who wrote a book of the same name.

The film speaks of a connection to the natural world and one’s place in it through fishing, and won a prestigious Peabody Award. Part of it was filmed on the Mill River, and the ethos of the piece was inspired by it.

“If [the Mill River] hadn’t been there for me as a kid in its pristine state, none of those videos or interviews or my books would exist,” Prosek said.

Barry said a connection to nature is really central to this whole discussion.

“When people don’t have that connection it’s easy to make short-sighted decisions,” he said.

Barry is thinking long term, the next generation.

The state usually does not get involved in discussions with towns about preserving resources like the Mill River on Easton’s South Park Avenue property, Barry said.

All the state can do is provide data and information if municipalities ask why it is a class 1 wild trout management area, he said.

“Some towns are very progressive and forward thinking,” Barry said.

Right now, DEEP is in the process of recommending a change to regulations. It would like to get the entire area from the outflow of the Easton Reservoir dam all the way down to Fairfield designated as class 1 wild trout management area.

It’s a slow process to get the state to make this designation, and if trout start dying in Easton due to development, they will be rethinking it.

Class 1 wild trout management areas are considered so special that they are catch-and-release areas for fishermen. There is no bait allowed, only barbless, single-hook artificial lures and flies, “to reduce hooking mortality,” Barry said.

And everything else that comes after.

“We consider the Mill River a gem because we have so few other places like it,” Barry said. “We would like to see it continue to be operated in a natural state.”

NEXT WEEK: How residents banded together and saved Trout Brook Valley and The Four Corners in Easton in the 1990s.

Link to The Complete Angler below