Upcoming Brown Bag Lunch and Q & A with the First Selectman…

Posted on February 18, 2020 by Citizens for Easton | Leave a comment

First Selectman Bindelglass invites the public to a brown bag lunch chat on February 18th, 2020 at noon at Easton Town Hall, Conference Room A. Come spend some time with the First Selectman. All are welcome!

There is also an opportunity for Q & A with the First Selectman on February 19, 2020 at 5:30 pm at Easton Town Hall, Conference Room A. 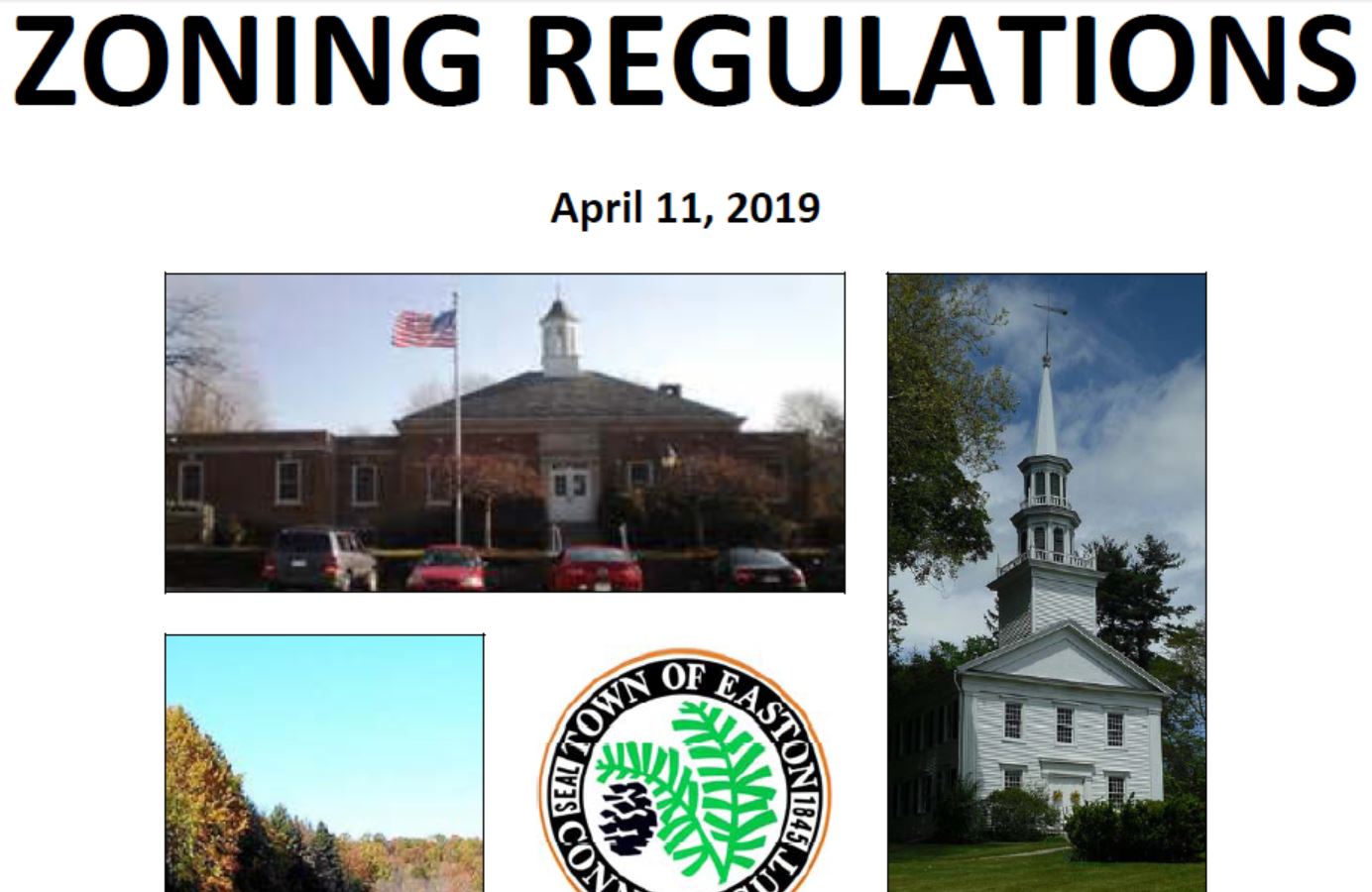 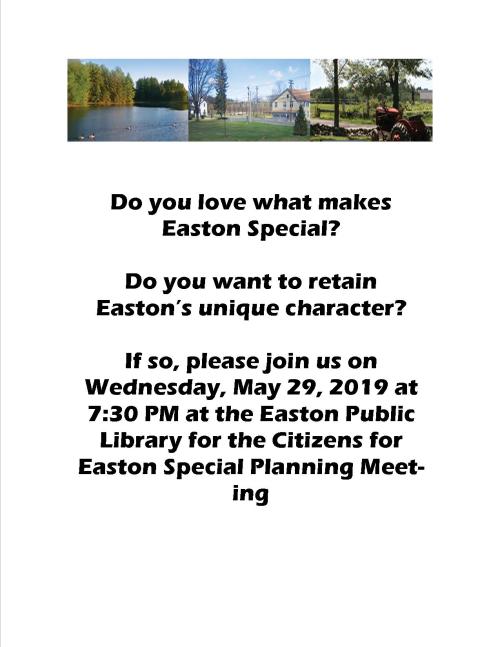 Posted on May 24, 2019 by Citizens for Easton in Easton Government, Easton's history, Preserving Easton, Town meetings

On Monday May 20th 6 PM, at the Helen Keller Cafetorium, P&Z will hold a hearing on the proposed zoning regulations.

We are very concerned with these regulations as they restrict how homeowners may use their properties including but not limited to restrictions on home businesses, storage of boats , trailers and other recreational vehicles. Also included are descriptions of permissible businesses in the newly created Easton Village District.

See the prior post below (CitizensforEaston.org) for a link to the Draft Regulations.Please consider attending this very important public hearing. 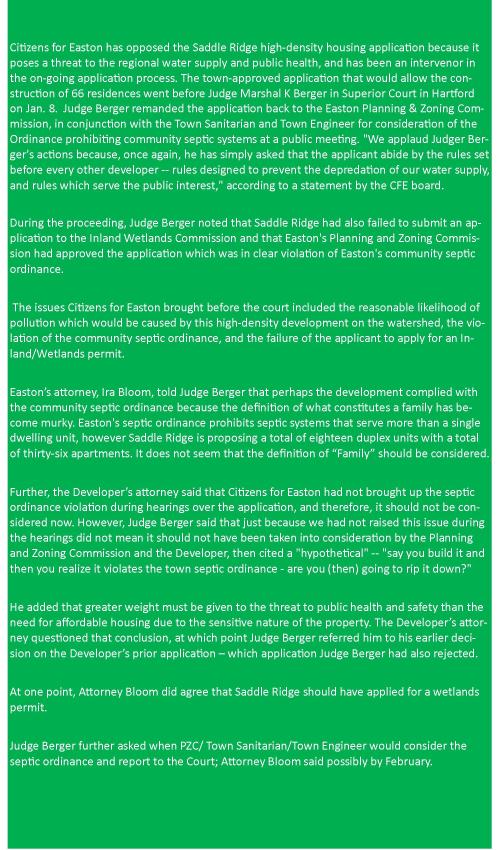 LETTER TO P&Z ON THE DRAFT PLAN OF CONSERVATION & DEVELOPMENT

I am supplementing my prior comments to you on the draft Plan of Conservation and Development because while I previously emphasized the reasons why you should not include some of your concepts in the POCD, in so doing, to some extent I neglected to address the reasons which you give for including your concepts.

Your concepts for the village district and commercial zone and clustered development (as well as congregate care, age-restricted housing and planned retirement communities which I had not previously commented on) are proposals for radical changes in zoning in Easton. We should all be able to agree that if radical changes are to be implemented, there should be good reasons for doing so. Let’s take a brief look at your reasons.

P&Z has stated that the village district concept may help lower taxes in Easton. Incorrect. It would take 185 Easton Village stores to make a 10% reduction in taxes.

P&Z has stated that the village district concept will improve the grand list and house sales which are lagging behind other towns. Incorrect. The latest statistics for the first half of the year as published by one of the members of the planning and zoning commission shows that Easton leads all of the neighboring towns in the percentage increase in number of homes sold for the first half of the year. In that same report, although the median selling price for the same period has decreased by 14%, this is pretty much on par with all of the neighboring towns with the exception of Redding which increased by 9.2% and Wilton which increased by 3.9%. We would suggest that Easton sells better than all of the surrounding towns and that might well be due to its bucolic nature which in the future will become more and more important as other towns continue their commercial development.

P&Z has stated that the village district will provide a place for town people to congregate. Incorrect. There are already many places of congregation in town including the already existent grandfathered businesses within the proposed village district.

The planning and zoning commission also argues that it would be desirable to encourage millennials to move to Easton. While some would argue against that, in any event creating a village district is not going to do it. What might be of help would be to increase the amenities available in town, such as a year-round swimming pool for residents, but the cost of such improvements is probably prohibitive. What might be of help, and importantly not significantly costly, would be to give every new resident a one-year free membership in the Easton Community Center. To do so would encourage use of a presently existing gathering place in Easton and perhaps would encourage use and support of the Community Center after the year’s free membership.

I have not previously addressed the POCD concepts of “congregate care or similar facilities to provide housing alternatives,” “age-restricted housing/planned retirement communities,” or “multifamily dwellings.” All of these concepts, while not fully developed in the POCD, would be radical changes in our zoning and, as the commission itself points out, difficult to achieve given the need for protection of the water supply to over 400,000 Fairfield County residents which Easton provides.

The Board of Selectmen has received and is considering the POCD. I urge the members of the Board of Selectmen and indeed all of the citizens of Easton to oppose the radical changes proposed in the plan of conservation and development. Many do not recognize that the planning and zoning commission is the only entity which will vote on the POCD. The citizens of Easton do not have a vote in this matter. The commission is, however, holding a public hearing on October 1 at which comments will be received. The commission previously held a public hearing in June with about 130 people in attendance. The strong majority of those in attendance was to oppose radical changes in our zoning as suggested in the draft POCD. Nevertheless, the commission ignored the sentiment of the meeting and made virtually no changes in the draft POCD. Hopefully, if a large number of residents oppose the radical changes at the meeting on October 1, the planning and zoning commission will heed the sentiment of the town’s people and remove the proposed radical changes and keep Easton to jewel of Fairfield County.

Posted on August 16, 2018 by Citizens for Easton | Leave a comment
Sacred Heart University will be presenting a proposal to lease a portion of the South Park Property for the purpose of a baseball field. The public is invited to comment and ask questions. This is agenda item #1 of the regular BOS meeting.
Item #3 is public comment.
We urge you to attend.
board_of_selectmen_regular_meeting_agenda_08-16-2018

P&Z will review with Glenn Chalder comments received as a result of the public information meeting held June 20, 2018.

If you wish for your opionion to be considered, it must be received prior to this meeting. Please email P&Z at: manania@eastonct.gov