PUBLISHED ON August 20, 2021by Jane Paley and photos by Tomas Koeck

The weather was iffy as volunteers set up at the Morehouse Park pavilion on the Samuel Staples Elementary School campus Saturday morning. But the skies cleared in time for an estimated 300 arriving families to enjoy the 12th annual Citizens for Easton Farm Tour.

Before setting off on self-guided tours of the participating farms and historical sites, many families lingered to watch the fun and games and sip the lemonade that Joel Silkoff and his Easton Community Center staff had arranged for the younger set. Families also enjoyed snapping photos of their little ones atop the Haller family’s vintage tractor and beside the hay bales provided by Pond View Farm.

Master gardener Carol Hamilton and master composter Alpheus “Alph” Winter were on hand to answer questions and do demonstrations for more than 50 curious visitors. Members of the Easton Garden Club treated 80 young people to mini-lessons on how to grow sunflowers, and each received a potted sunflower to grow at home. The seedlings were donated by Sal Gilbertie. To help beat the heat, Adrienne Burke, owner of Greiser’s Coffee and Market, donated watermelon wedges.

There was a free prize drawing and the lucky winners received gift certificates for farm goodies and one winner, a hand-blown glass heart paperweight created and donated by Jason Curtis.

Brittany Conover, who manages Shaggy Coos Farm said, “It was so great to see so many new and old faces and share our passion for agriculture. We love working with other local businesses and had a great time with Veracious Brewery. Looking forward to future farm tours!”

The honey at the Golden Pond Apiary, including mead for the grownups, went fast. Owner Howland Blackiston engaged in conversations with the many visitors who came for tastings and a chance to see his bees in action.

The Caprese salad sandwiches were a big favorite at Sherwood Farm: heirloom tomatoes and fresh basil on country bread with a splash of olive oil.

The Farm Tour is hosted every year by Citizens for Easton, an organization devoted to local preservation and conservation efforts and committed to promoting agricultural and farm-friendly activities.

Get Ready for Citizens for Easton’s Annual Farm Tour!

The 12th Annual Farm Tour hosted by Citizens for Easton is expected to draw lots of visitors to celebrate Easton’s farms and farmers. The event highlights Easton’s agricultural traditions and celebrates local farmers’ valuable contributions to the community.

A map of participating farms and sites will be distributed on Saturday, Aug. 14 at the Samuel Staples Elementary School pavilion, 515 Morehouse Road, Easton, Conn. Map holders will receive free treats at many of the venues.

Activities for visitors of all ages will be held at the pavilion beginning at 10 a.m. From 10 until noon, children’s games will be led by Easton Community Center’s facility director Joel Silkoff and the ECC staff.

Also at the pavilion, the Easton Garden Club will provide a flower-planting event for amateur gardeners of all ages, who will be able to pot sunflower seedlings and take them home to grow. Master Gardeners & Composters and the Easton Courier will also host the events there.

The Farm Tour free prize drawings, a relatively new addition to the event, will include gift certificates from local farms and businesses.

In addition to the farms, the Adams Schoolhouse will be open to the public. For times, consult map. Free goodies at Greiser’s Coffee and Market will be offered to map holders.

This year the self-guided tour includes 14 stops at both farms and sites of historical interest. Maps will include the times of special events and tours at each location.

Free samples of produce, cooking tips, tours and activities for children will be offered throughout the tour.

The farm tour provides young and old a chance to have good, old-fashioned fun. Visitors can sample Easton’s bounteous agricultural products and at the same time support those who work hard to provide them. 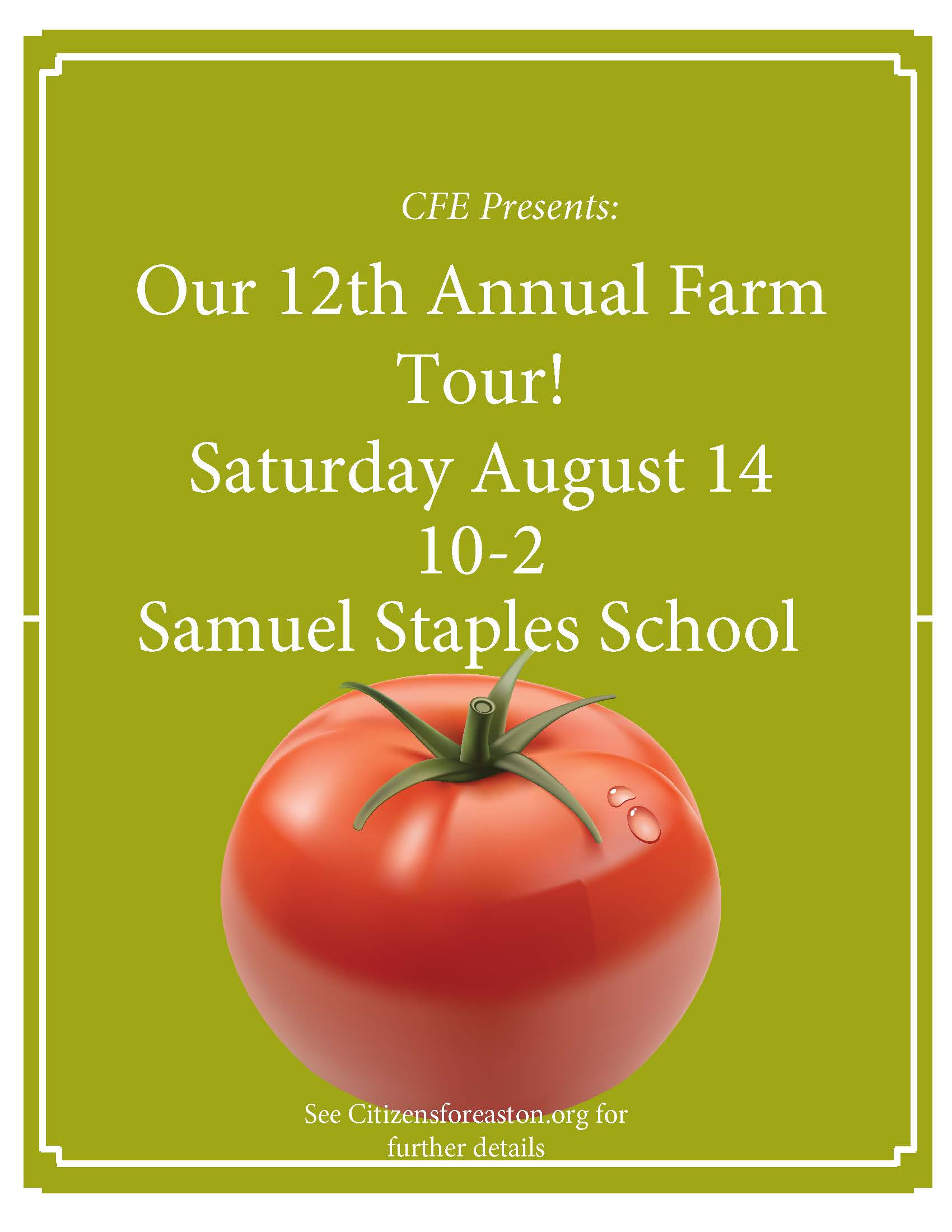 Click below to see our view of why we should retain this property as open space. It is the reason why Citizens for Easton was formed, and why Bill Kupinse was so passionate about keeping the property for present and future generations.

You may also sign at Greiser’s Coffee & Market, or email us at cfe@citizensforeaston.org, and a Board member will swing by to obtain your signature.

For more information, click below to see letter to selectmen dated April 28, 2021.

Posted on April 9, 2021 by Citizens for Easton | Leave a comment

From Silverman’s, on down the road to Greiser’s.   From the Saugatuck, on over to the Hemlock.  From the Aspetuck River, over to the Mill River.  East to west, north to south. All of it, as if a famous line from a famous song appealed to him: This land was made for you and me…

This land was certainly made for Bill.

He had an unusual bond to the land, an enlightened bond. It was rooted in the past, when Easton was a hard-scrabble farm town which seemed especially adept at growing rocks. A couple hundred years ago, those rocks were stacked into stone walls. Those cleaved the woodlands, representing someone’s hard work and also their futility.

Who was that “someone,” he wondered. Were their lives and efforts in vain?

With a few notable and enduring exceptions — the Edwards or Sherwood’s, for example  — most farmers abandoned Easton in and around 1900. They were happy (or not) to take whatever Bridgeport Hydraulic offered. Their fields turned to brush, brush to trees. Nature rebounded. The Easton past receded and in places disappeared altogether. Easton became a “reservoir town.” Its number-one promoter called it the “Jewel of Fairfield County.”

That number-one promoter knew “jewels” were easily tarnished, easily lost. When that happened, the past was lost and in the bargain, dishonored. He refused to allow that to happen.

In 1972, he helped found Citizens for Easton. It opposed the construction of GE’s corporate headquarters off of South Park. GE gave up, and went across the Merritt instead.

Soon, more challenges to long-standing zoning regulations appeared. Some wanted to commercialize parts of town, or terminate three-acre zoning. Some wanted to build cluster housing. One wanted to put in street lights.

To have just one commercial district would not change the character of the town insisted its proponents, but Bill knew otherwise. It was never about one proposal, but the aggregate of the proposals. Bill’s famous “Camel in the tent” theory. Precedents would be set. One after another. Like dominoes, or stonewalls. A condo complex on one abandoned farm would be followed by a condo complex on another.  A “commercial district” here, eventually a Target there.

Nothing against condos, commercial districts or Targets. Like all of us, he patronized them. He wasn’t against anything. Bill was for something — that past, for those who came before, and especially for those who would come in the future.

What is the role of a “citizen”? He wondered about that too. Seems obvious, or superficial enough. Not to Bill. A citizen is someone who believes that he or she has an obligation to other citizens — those living, those gone, those yet to come. It was a complex configuration, a multifaceted one, but not for him. We’re all part of a community and our responsibility is to that community. That’s what a citizen does, who a citizen is. Who he was.

Who was Bill? He was old school. Of course he was. He spoke quietly. He wore a conservative gray suit. His tie was never loosened. He had a slight stoop in his shoulders.  He walked with purpose.

Bill Kupinse was an honorable man. We’re blessed to have known him. Above all, Easton was blessed.

On the shirt tails of our referendum yesterday regarding the sidewalk, please join this informative forum this evening. Many issues that are on the table for discussion may be a jumping off point for why the sidewalks are becoming first and foremost at the forefront now.
Join us for a virtual forum on zoning changes that will affect your home and your town:
Date: Wed. March 31, 2021
Time: 6PM – 7:30 PM
Zoning, Land Use Issues & What is at Stake
Place: Please be sure to register here:

www.eventbrite.com/e/zoning-land-use-issues-whats-at-stake-for connecticut-tickets-148291549015
Here’s why:
A dozen bills are proposed in Hartford that if passed will restrict your local zoning board’s authority to regulate land use without considering the uniqueness of each of our 169 towns in Connecticut.

This proposed change in the CT General Statutes puts zoning control at a state level- it does not consider individual towns, and it is aimed at increasing density.

At the 32 minute mark- the Westcog speaker- explains the bill and voices the same concerns we have raised for the last approx 50 years- he says this bill will eliminate public hearings, and the state will not  consider water quality issues

This from Sen. Hwang:

Posted in Easton Government, In The Press, Legislative

Posted in Easton Government, In The Press, Legislative